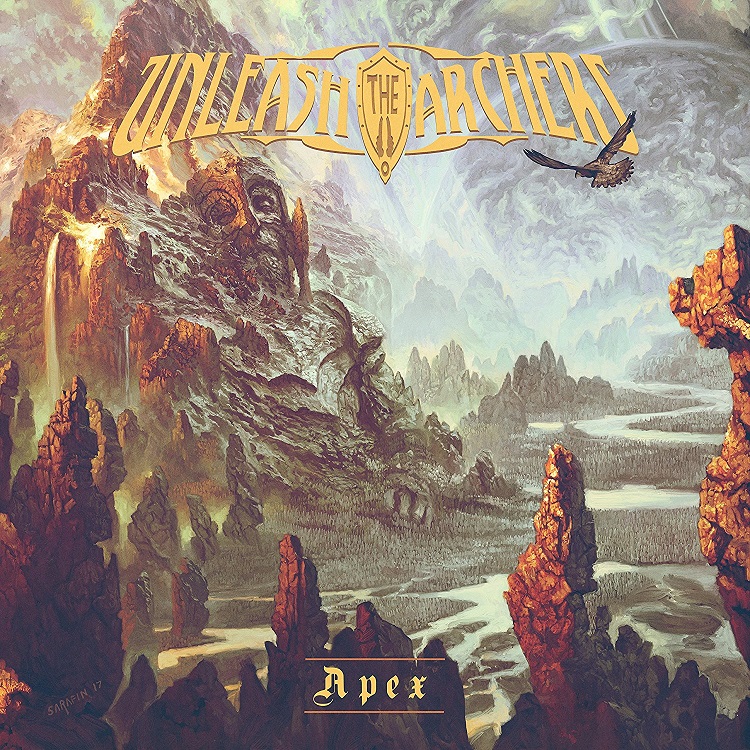 Alright! So the record is a concept album, which means there is one linear story throughout. I will try to be brief but there is so much going on it may get a bit nerdy! (lacht) Here it goes…

Our protagonist, “The Immortal” is awakened in his mountain keep by the calling of a distant voice… He leaves the safety of his stronghold only to discover that he has been asleep for over a thousand years and much has changed. There is a sense of hope about this track, but also a deep foreboding; The Immortal knows this voice will lead him down a dark path.

Wandering for days, searching for the voice but unable to find it, The Immortal begins to lose hope. Suddenly, a shadow appears on the path before him; it is a falcon, and it cries out for him to follow. Despite being a very upbeat track, there is that underlying sense of menace again as well, as our protagonist is no ordinary man: he was cursed at birth to serve whoever awakens him with blind devotion.

Every song on the record is sung from The Immortal’s point of view except for this one, and the next. This track is actually an omniscient POV, and I like to imagine it is the voices of the people The Immortal meets on the path to his new master. Through this track we discover that his master is “The Matriarch”, our antagonist, a sorceress and unwaveringly evil queen of the realm. It’s fast, fun and driving. We call this track a “quick banger”, haha!

You can find this track on youtube as our first single from Apex and it’s one of the heaviest. This song is sung in the voice of The Matriarch, as she is meeting The Immortal for the first time. A very important part of the story is told during this song, which is one of the reasons we wanted it to be the first single; we learn that The Immortal was awakened in order to find The Matriarch’s four sons and bring them to her so she can kill them in a ritual to attain immortality… Not too complex right!?

The first son, the eldest, he is a bureaucrat in the seedy black market that passes for government in this land. He has greased palms all the way to the top and now it’s time to fall. Of course, he attempts to bribe The Immortal for his freedom, but not being an ordinary man he can not be bribed, and instead the son is dragged to his death ‘The Coward’s Way”… Begging on his knees. Despite this song being rather morose it actually has one of my favourite choruses!

Son number two, this one is a religious figure, more of a cult leader than a spiritual authority. He has picked up a thing or two from his mother and has an unnatural way with words. He spins silken webs with a serpent tongue and almost defeats The Immortal, but in the end our protagonist prevails, and the second son lies upon the altar next to the first. This track was an experiment for us; we have never done a mid-paced vocal-centric track like this before and it’s as close as we will come to a ballad on this record.

TEN THOUSAND AGAINST ONE

Triplets! This whole song was written around triplets. Kick drum triplets to be precise. As soon as I heard Scott’s drum part I knew it belonged to this chapter in the story. The Immortal stands before an army of ten thousand, who are in turn standing between him and The Matriarch’s youngest son, their general. The army is fiercely loyal and The Immortal begs them to lay down their arms, but they will not. Ten thousand lives in exchange for one is a price that weighs heavily on The Immortal, but he cannot betray his master. In fact, losing a battle is something he just doesn’t know how to do.

Love the intro on this track, our newest member Nikko performs the bass solo and he is just amazing. So stoked to have such a talented musician as a part of our team! This track is about, you guessed it, offspring number four! However, this one is no corrupt politician, no manipulative false idol, no cowardly general… He is a kind, quiet father trying to stay as far away from his acidic mother as possible. Unfortunately, The Immortal must do as he is told, and the fourth son is taken away to die just like the others. This track is special though, as it features our wonderfully versatile guitar player Andrew Kingsley as the voice of the son during the bridge! Definitely sprung that part on him in the studio at the last minute, but he rocked it. (lacht)

The Immortal returns to The Matriarch triumphantly with sons in tow, expecting to finally be freed of his curse (which she promised to do in ‘Cleanse…’) only to discover that she never intended to set him free, and instead sends him back to his mountain to slumber until she needs him again. This does not surprise the Immortal; he has lived a long time and doesn’t expect much from humanity anymore. He heads back to his cozy mountain keep and prepares to sleep for another thousand years.

Hands down my favorite track on the record, we wrote this one on the spot while we were in the studio in Denmark and I love how it turned out. It’s about The Immortal when he is sleeping, about how he is only free in his dreams. Apex is not only a physical place (his mountain) but also an emotional one; it’s that feeling of having reached the place where you were meant to be. It’s like coming home after a long time away, or succeeding at a task you have been working on forever. It’s a sense of accomplishment, a cathartic event or a culmination… But in no way is it the end… Not even close! (lacht)