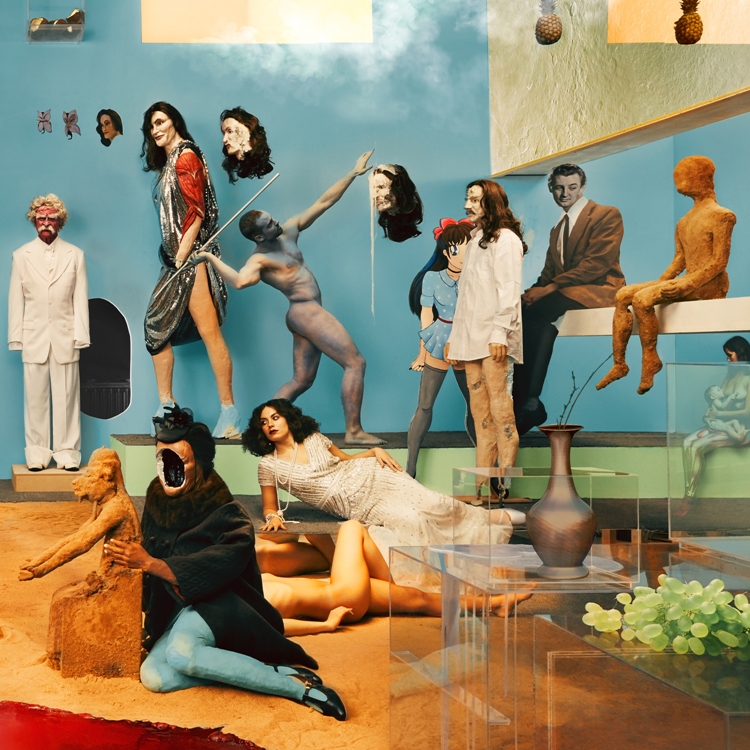 We originally recorded on tapes, but they got damaged. We were recording live on a farm and it was raining for three weeks. Some of the stuff was suddenly missing, some was messed up, and then we re-sampled and sort of re-constructed it so that we were almost using our own recordings. We had built that 60s rock album, and then we re-contextualized it. I was listening to a lot of electronic music when we made the last album, but I got tired of listening to that. There are points when it becomes a little bit soulless, so I started listening again to folk, rock, soul and older hip hop and I got inspired by that.

David Altmejd did the artwork. I’ve been a fan of his work for 10 years. It looked to me like what I wanted our music to sound like. He sent us a box with all the sculpture heads and then we started the dialog. We wanted characters from our past albums and references to our songs. He interpreted it in the way he did. We were talking about Sgt. Pepper’s, Salvadore Dali, Hieronymous Bosch and Pee-Wee’s Playhouse. It’s just different characters interacting.

It’s a reference to the biblical myth of Cain – the son of Adam and Eve. Cain was one of them. The recording is really hissy and messed up. There’s a buzz in it. We couldn’t get rid of it, so we kept it. That’s why it sounds kind of Beach Boys, kind of Zombies, a little bit Beatles.

This song was built on this really rough, industrial sounding drum beat. We put some folk elements in there. I just thought it was an interesting phrase: I am chemistry. It’s just one of these things that rolls of your tongue. It  seems like it means something. Maybe it does, maybe it doesn’t.

To me it sounded a bit Talking Heads, 1977, kind of dancy, kind of fun and simple. In fact it’s about the idea of just being an idiot and fucking up on your relationship or your life.

This is with Suzzy Roche from the band the The Roches, which was like a late 70s band of sisters that we were really influenced by. She sings on this record. It’s just like a duet on this one. It became this cool, dreamy dialogue. She has this very witchy quality to the vocal and still sounds like a child. This is perfect. I love that!

It was the idea of holding up the free market and the economy as the true god. These days it’s seems like it’s the market. Everyone talks about ups and downs. You can’t regulate business too much because then the market will go down – at least that’s the bullshit they say in America. It’s just a parable for sacrificing your life to this market.

Kind of a hymn. It’s about that searching, that idea of trying to understand what religions are and what people that have faith see in it. The lyrics reference old biblical ideas. My grandmother was an orthodox Jew and my grandmother on the other side grew up very catholic. It’s reflecting both ideas.

That was one of snippets from that tape that got damaged. There was just this little piece that was okay. The rest was lost. We just cut it in. We were recording it like a jam.

That’s where the record takes off and maybe goes to another planet. It’s about falling in love with an unattainable beauty – something really alien. The reference is some science fiction stuff like William Gibson and Aldous Huxley.

It’s just a silly one. Picture a little robot kid playing like an android child.

With this one we were referencing some of the 60s stuff like The Zombies. We were matching together songs like taking one song and putting it into another and another and having a float – almost like the second side of Abby Road in a new context.

Anand wrote this one about his daughter to pay tribute. It’s just a little ballad.  The female energy on the record was very important for us. If there’s any idea of a god, it’s a female one. I assume I’m a feminist, whatever that means – I’m not sure these days. I’m not very interested in machismo. It pretty much has been a disaster for 2000 years.

We had a friend who took his own life five years ago. This song is about him. It was an interesting guy who was in a tragic situation. Sometimes you’re not sure if you wanna write about those things, but paying homage to that person just felt right. He loved music and he loved our music. Sure I did listen to Joy Division during that time. There’s another guy who took his own life. There’s obviously a reference to that in there.

This is like the orchestral and robotic one. Another recording we did on the farm. We just distorted it and made it sound really weird. It’s not a very optimistic ending. Suicide and chaos!